It was my honor to meet and interview Mizz Virginia.  Sadly, I still have questions to ask her. — Billie McNamara

Virginia Rosebud Sneed Dixon, age 101, died Thursday, Oct. 14, 2021 at the N.C. State Veterans Home in Black Mountain. She was a member of the Eastern Band of Cherokee Indians and 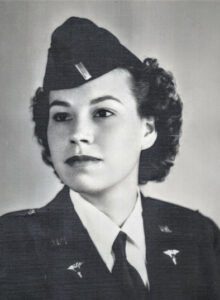 the daughter of the late Cam and Minda Sneed of Cherokee.

“Boss”, as she was called by family and friends, was born and raised in Cherokee and attended the Cherokee Boarding School through 6th grade. She graduated from Cherokee High School in 1938 and went to nursing school in Knoxville, Tenn. In 1942, she joined the Army Nurse Corps and was stationed at Camp Lee, Va., then assigned to Walter Reed Hospital in Washington, D.C. during World War II. She was later assigned to a field hospital on the Burma Road in China.

After three years of civilian life, she rejoined the Army Nurse Corps and was assigned to the 171 Evac Hospital during the Korean War. She returned to the States in 1952 and was married in Fort Benning, Ga. in 1954.

She was preceded in death by her husband, Col. David. W. Dixon, and also by all of her siblings: Carrie, Ernest, Pokie, Patrick, Claudie, Marie, Sonny, Hooter, and Priscilla.

The family would like to sincerely thank the staff of the N.C. State Veterans Home, Pruitt Health Care and Four Seasons Hospice. Long House Funeral Home in Cherokee is in charge of the arrangements.

Burial will be at a later date. In lieu of flowers, donations may be made to Four Seasons Hospice of Hendersonville, the American Red Cross or The American Cancer Society.