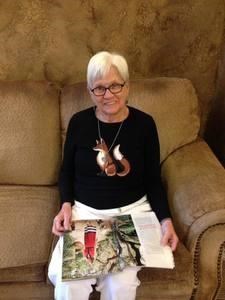 The Passing of Ima “Jo” Fox
Longtime South Pasadena resident Ima Jo Fox, affectionately known to many as “Momma Jo,” passed away on August 24, 2018, in Claremont, California, surrounded by family.
Born July 1, 1932, in Wheat, Tennessee, Jo was the first of four siblings born to Carl and Maggie McKeehan. Her sisters and brother grew up helping on the family farm on Pea Ridge during the Depression. She graduated from Sunbright High School in 1949 and left home to study nursing at Knoxville General Hospital. She earned her Registered Nursing degree in 1951.
While in Knoxville, she met her future husband, William “Bill” Fox on a blind date, married, and moved to New York City.While in New York, six of the nine Fox kids were born: Liz, Patty, Brian, Will, Kevin, and Virginia. In 1965, Bill became the assistant foreign editor with the Los Angeles Times and moved the family to South Pasadena. Three more children arrived soon after, with Joan, Sean, and Tim joining the den.
Jo was a constant presence for her nine kids and the dozens of others who called the Stratford house a home away from home. She shuttled everyone to their respective schools, activities, and sporting events during the years and served as the head nurse in taking care of everyone’s minor ailments.
In her spare time, she tried her hand at tennis and acting at the local community theater, where she enjoyed the small stage. With the passing of her husband Bill in 1985, she continued working at the local Home Savings & Loan branch as a New Account Representative. Upon retiring, she enjoyed her travels around the US to visit with her kids and grandkids, as well as visits to Japan, the UK, and Italy.
Ima Jo is survived by her sisters Carlene Foster and Gwynn Bingham, and her brother Lynn; her nine children Elizabeth Shenton (BJ), Patty Huber (Hank), Brian, Will (Tammy), Kevin (Naomi), Virginia (Alex Gastelum), Joan Deussen (Ed), Sean (Allison) and Tim (Nicole); her eighteen Grandchildren — Liz’s kids Chelsea, Chris & Brent; Patty’s kids Casey, Patrick, Katie, Riley, Allison, Ian; Will’s kids Brittany & Austin; Joan’s kids Chad & Davis, Sean’s kids Andrew, Patrick & Lauren; Tim’s kids Peyton & Matthew; and her seven great-grandchildren Sally, Lucy, Greta, Olivia, Calvin, Charlie Joy & June.
Funeral will be held at Holy Family Church in South Pasadena on Thursday, September 27, 2018 at 4 p.m. Private interment will follow at Riverside National Cemetery.
In lieu of flowers, the family requests donations to the Alzheimer’s Association, PO Box 96011, Washington, DC 20090-6011 or alz.org.Please sign the guestbook at legacy.com/obituaries/pasadenastarnews.