The hospital was later known as Eastern State Psychiatric Hospital, then Lakeshore Mental Health Institute before it closed.  Most Knoxville graduate nurses did a psychiatric nursing rotation there during their training. 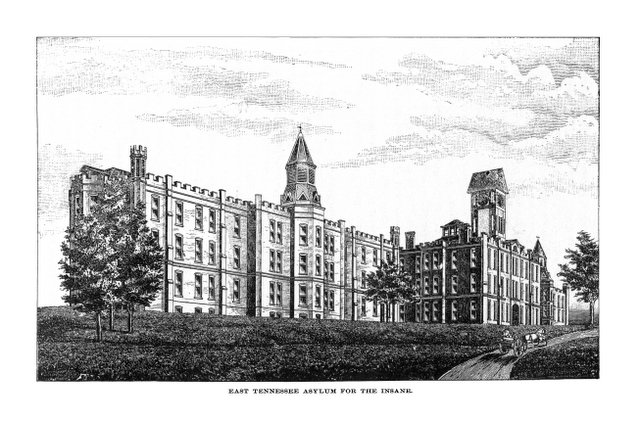 The following text is from Standard History of Knoxville, by William Rule (pages 536-538):

The superintendent had for some years urged upon the legislature the necessity of providing more accommodations for the insane and in 1883, there was appropriated, through the efforts of Hon MD Bearden, $80,000 for the East Tennessee Insane asylum, which was to be erected in the vicinity of Knoxville upon the property known as Lyon’s View. Under the provisions of the act making this appropriation, the governor appointed as a board of directors the following gentlemen: RH Armstrong JC Flanders, and Columbus Powell, all citizens of Knoxville and they upon effecting an organization elected WH Cusack, of Nashville, as architect, and Dr Michael Campbell, of Nashville, superintendent of construction.

After visiting the most important and famous asylums in the country, this board of directors adopted a plan embracing the very latest improvements both architectural and sanitary. The asylum consists of nine buildings, including an administration building, chapel, kitchen, laundry, boiler house, and engine house. The main building is 472 feet long, and the wards consist of 174 rooms capable of accommodating from 250 to 300 patients.

In 1885 the legislature granted an additional appropriation of $95,000 to be used for the completion of the buildings and the asylum was ready for occupancy on March 1, 1886, the patients naturally belonging to East Tennessee being transferred thither.

This asylum is about four miles from Knoxville, its situation being on high ground commanding a full view of the Tennessee river and the adjacent hills and mountains with their beautiful scenery. No more desirable location could anywhere be found for an institution of this kind, designed as it is for the comfort and care of persons suffering from the diseases which it is especially designed to alleviate if not to cure.

A building for insane colored people was erected here in 1896, suggested first by Dr Campbell, and a bill providing for an appropriation for this purpose was introduced by Hon SG Heiskell, carrying an appropriation of $20,000. The building is three stories high above the basement, is 63×135 feet in size, the basement being used for heating apparatus and the mechanical department for engineers. On the first floor are two dining rooms ,one for males the other for females, each room being 20×50 feet in size, and also on this floor is a fine sitting room, and a strong room for violent patients. The second and third stories have cast iron stairways with steel railing, and each story has an assembly room used for the exercising of patients, and is provided with corridors leading into the different cells.

There are in this building 250,000 square feet of floor space, all the floors being made of mill flooring, and covered with cement in order that the building may be fireproof. The slate roof covers 100.000 square feet the building, contains 160 windows, and 100 doors. The architects of this building were Baumann Bros of Knoxville, and the contractors the Galyon & Selden company.

Still another building at this institution was provided for in April, 1898, which was designed to be one of the finest buildings connected with the asylum. The bids for its construction ranged all the way from $23,399 to $19,300, the latter bid being made by JD Hunt of Chattanooga. It is to be a fireproof structure two stories high and fitted up in the interior with the most modern arrangements necessary for the accommodation and comfort of its inmates. The appropriation made for its construction was $25,000. Reports on the condition of the asylum are made biennially because the sessions of the legislature are biennial. The last report for the period from December 19, 1896, to December 19, 1898, inclusive, is as follows:

Knoxville News Sentinel has a photo archive for Lakeshore on its Web site. Click here to view the images.